Located 50 miles southeast of Hartford in southeastern Connecticut, the Mashantucket Pequot Tribal Nation is North America’s oldest Indian reservation having been established in 1666. 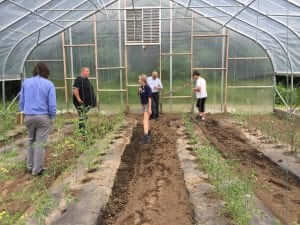 With UConn’s help, Mashantuckets aim to cultivate a healthy future

In his mind’s eye, Daniel Menihan Jr. sees a time when backyard vegetable gardens dot the Mashantucket Pequot reservation, their yields nourishing healthy tribal families. By then, he figures, the Mashantuckets’ own commercial growing operation could be regularly supplying produce to Foxwoods Resort Casino restaurants. It’s a pretty picture. And it’s not far-fetched.

Two years into a four-year collaboration with the University of Connecticut’s College of Agriculture, Health and Natural Resources, tribal members led by Menihan, a tribal councilor, have grown sweet corn and heirloom tomatoes on tribe-owned property here on Swantown Hill, near Foxwoods’ Lake of Isles golf courses. They’re about to harvest honey and will soon plant lettuce.

Funded through the U.S. Department of Agriculture’s Federally Recognized Tribes Extension Program, the undertaking seeks to improve food security among the Mashantuckets; engage tribal youth; boost the economic viability of the 1,100-member tribe’s agricultural enterprises, and educate tribal members about nutrition and health. “It’s a great investment from the health standpoint,” said Menihan, who likes to emphasize that aspect of the program. “We bring the kids up here and let them pick stuff and take it home. They light up.”

Menihan, joined by Shuresh Ghimire, a UConn Extension educator who helped the tribe secure the federal grant, led a recent tour of the Swantown Hill property. Part of a 187-acre parcel known as the Ackerman Farm, it was purchased by the tribe about 15 years ago. Participants in the program have tilled a cornfield and a children’s garden and constructed two side-by-side high tunnels — greenhouse-like structures that facilitate growing in a semi-controlled environment. The high tunnels are not heated, and the plants grown inside them are rooted in the ground. In greenhouses, plants typically are grown in containers. 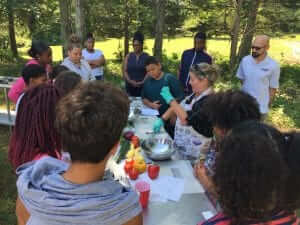 With Ghimire guiding the process, the tribe grew tomatoes in one of the high tunnels during the growing season that recently concluded. Some of the harvest was sold at a stand on the reservation to tribal members, employees and the community. The plan is to start selling tomatoes to Foxwoods in 2020.

The $280,000 federal grant — $70,000 a year for four years — and additional funding from the Indian Land Tenure Foundation, a nonprofit organization, has so far provided for soil-testing, the high tunnels, hook-ups for water and electricity, development of a business plan and the purchase of such equipment as cold storage, a disc harrow, a rototiller and a mulch layer.

A good chunk of the grant money goes to pay two youthful tribal members who are being trained in vegetable-growing, knowledge they will impart to tribal youth. Some of the training takes place in a classroom. In a sign of its commitment to the program, the tribe also has created two full-time positions to support the growing efforts, Menihan said.

The program has helped foster a relationship between the tribe and UConn Extension, an outreach service that maintains offices around the state, including one in Norwich, about 10 miles from the tribe’s reservation. Despite the proximity, there had been little interaction between the two.

“They rarely attended our events; we knew little about them,” Ghimire said. “We sat down together and talked about the need for this grant. We knew we could help them to grow their own food and help with health and nutrition within their cultural ways.”

Growing vegetables was hardly foreign to the historically agrarian tribe, which raised the “three sisters” — corn, beans and squash — as well as tobacco centuries ago. After the tribe reorganized in the 1970s, and before it gained the federal recognition that allowed it to pursue gaming in the 1980s, members raised hogs, harvested maple syrup and grew hydroponic lettuce.

More recently, the tribe’s Sugar Shack maple syrup business started selling syrup at Foxwoods in 2016 and currently provides it to the casino’s Cedars Steaks & Oyster and VUE 24 restaurants. The syrup also is available at the Mashantucket Pequot Museum and Research Center and at the tribe’s Pequot Outpost convenience store.

Ghimire said federal officials monitoring the tribe’s progress have been impressed. About 40 percent of the benchmarks for the four-year program were achieved in the first year, according to Menihan.

Still ahead are the establishment of a 4-H Club for tribal youth and further educational outreach to tribal members in need of information about nutrition and diabetes, a disease endemic in Indian Country. Healthier eating, including less consumption of fast food, is a goal tribal populations embrace.

Menihan wants to work on establishing a Mashantucket Pequot Department of Agriculture as a standalone division of tribal government. He said the idea has the support of the tribal council and tribal membership. “You want to do right first,” he said of the health aspect of the growing program. “That’s the real priority.”

Hence his goal of seeing, within 10 years, “vegetables growing in everybody’s backyards.”

He readily acknowledged that the economics are important, too. Before the federal grant money runs out in 2021, the Mashantuckets’ commercial farming operation might have to be able to sustain itself as well as the tribe.

This article, written by Brian Hallenbeck, appeared in The Day newspaper in New London, CT, on Sept. 28, 2019.  Read the original article at theday.com.