The Coeur d’Alene Reservation is located in the lakes country of Northern Idaho and is home to nearly 7,000 community members. Included in the Reservation’s nearly 350,000 acres is a significant portion of Lake Coeur d’Alene and the submerged lands beneath it.

The One Sky One Earth Farmer’s Market was established in 2012 in partnership with the One Sky One Earth Food Coalition. The vision of the farmer’s market is: Healthy food + healthy people = thriving community. Featured products include home-grown produce, handmade crafts and other goods. Free food preservation and basic gardening workshops are offered. Community gardens in DeSmet, Plummer and Worley are maintained by volunteer community members. 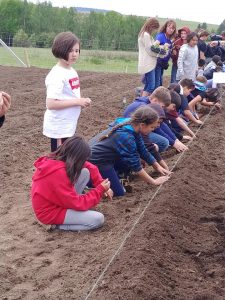 4-H is the largest youth organization worldwide, reaching all 50 states and 80 countries. Studies show that 4-H youth outperform their peers in academic performance, college attendance and contributions to their community. They are less likely to engage in risky, negative behaviors, more likely to do service projects and help others, and more likely to seek school and community leadership roles.

Extension partners with the Plummer/Worley School District for the Success Center After-school program, which is open to children entering 2nd through 5th grade. Students have the opportunity to work on homework, attend field trips, engage in physical activity, participate in Science, Technology, Engineering and Math (STEM) education, and learn the Coeur d’Alene language and other life skills. 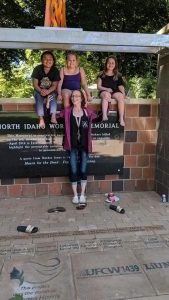 Extension works in conjunction with the Tribal Wellness Center’s “Rock’n the Rez” summer program for children in grades 1 through 5. Camp curriculum focuses on the importance of water quality, identification of native animals and plants, ecological services and human-environment interactions.

Back to the Earth is a three-week summer program coordinated by the Coeur d’Alene Tribe and the University of Idaho and made available to children in grades 1-6 from both the Coeur d’Alene and Spokane Tribes. Funded by a grant from the National Science Foundation, the program is focused on STEM curriculum and in helping students develop an interest in natural resources.

Water Potato Week (“Sqigwts Ha’chesetq’it”) is celebrated during the third week of October. Water Awareness Week (“ul sitkwe”) is celebrated during the first week of May. Both events include outreach to local schools for science, technology, engineering and math (STEM) education held on the Coeur d’ Alene Reservation on topics such as native foods and plants, fish, water quality issues, traditional tools, aquatic invasive species, cultural and language activities, and more.

The following article was published in the Spokesman-Review newspaper in Spokane, Wash.

HEYBURN STATE PARK, Idaho – When the long summer days waned, the women of the Coeur d’Alene Tribe headed out to the mudflats to gather water potatoes. Stomping barefoot through the marshy ground around Lake Coeur d’Alene, they severed the tubers from the vines, allowing the water potatoes to float to the surface.

Mackenzie Hammond, 11, took part in the centuries-old tradition Tuesday, though she came dressed in waders. “I found six,” said the Harrison Elementary School student, displaying grubby hands and a baggie of the starchy tubers. “I’m going to take them home and eat them.”

About 120 local schoolchildren joined the Coeur d’Alene Tribe for its annual Water Potato Celebration at Heyburn State Park. The event is a tribal holiday, marking the tuber’s importance in the tribe’s culture. “It’s the last food harvested in the gathering cycle,” said Raymond Brinkman, a language specialist for the Coeur d’Alene Tribe.

The arrow-shaped leaves of water potato – Sagittaria latifolia is its scientific name – are withered and brown this time of year, but the pink-tinted and grayish-lavender tubers were easy to spot in the mud.

Shrieking kids used shovels and their hands to scoop out the tubers, treating each like a treasure. The sticky mud was part of the attraction. It sucked away boots and mired ankles in muck. “Don’t stand in one place too long. You’ll get stuck,” adults admonished the kids.

The dig took place at Hawley’s Landing on the southern end of Lake Coeur d’Alene, where the water potatoes are free of heavy metals. The tribe has stopped gathering the tubers in some areas of the lake because of historic mining pollution, said Heather Keen, a spokeswoman for the Coeur d’Alene Tribe.

Digging for the tubers that the Coeur d’Alenes call sqigwts was serious business, Vince Peone told the school kids. The tribe’s ancestors dried meat, fish and roots, storing up food for the winter, said Peone, a wildlife technician. “It would have been all work and no play,” Peone said. “Every day, there were survival chores that had to be done.”

Peone got his first taste of water potatoes at a meal where traditional foods were served. “I had to eat them the traditional way: no salt or pepper,” he said. Now, “I like them with a little bit of brown gravy.”

The Coeur d’Alenes are the only indigenous tribe in the region that lived along lakes and harvested water potatoes, she said. Jordan, 33, brought her 4-year-old son to Tuesday’s celebration, which was his first time to gather the tubers. Jordan recalled her first water potato harvest. She was in middle school when her dad took her family on an outing to collect them.

Tribal elder Felix Aripa’s memories go back even further – to the 1930s, when his family and other friends and relatives camped at Benewah Lake in the fall. An old man from the tribe offered up prayers before the harvest began. Aripa’s mom used a special digging tool to find the tubers. It was a staff with elk antlers attached.

While the women gathered water potatoes, Aripa fished with his dad. They saw a muskrat gathering the tubers for his winter store. “He’s putting his water potatoes away,” Aripa’s dad told him. “Don’t steal from him.”

Aripa was an honored guest at Tuesday’s celebration, providing a link to the tribe’s past with his vivid stories. “Maybe this is my last water potato harvest,” Aripa said, eliciting an immediate chorus of “No, no!” from those gathered around him.